How many Bearings are there in a household?

The smallest and the biggest Ball Bearing

Bearings are available in many different forms and there are hundreds of manufacturers in the world. The smallest Ball Bearing ever produced has dimensions 0.5 x1, 5x0, 65 mm, i.e. 0.5 mm shaft size. The smallest in series production has dimensions of 1x3x1 mm. Small Ball Bearings/Miniature Bearing is most often used in medical technology, but also electrical, instrumentation, mechanical and aerospace engineering. The largest Bearing has a diameter of 13. 3 meters and a weight of 70 tons, according to SKF. It is said to be made for the oil field “Terra Nova” outside the Canadian coast.

One can also use Bearings to secure against earthquakes: San Francisco Airport uses advanced technology to withstand earthquakes and it involves gigantic “Bearings”. The building is supported by 267 pillars, each of which rest on a Steel Ball with a diameter of 1.5 meters. The Ball sits in a concave foundation. If an earthquake occurs, the ground can move up to 51 cm in any direction, i.e. the pillars roll on their bases. This is an effective way to distinguish the building from the movements of the ground. After the earthquake has stopped, the pillars go back to the center of their bases of gravity. 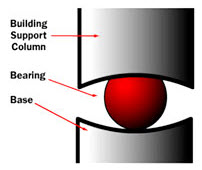 Most common bearing used in the world is the 608

The story of the creation of ball bearings goes back to the oldest. The first traces of the principles of rotation appear back to the time of the Egyptians, they were moving large blocks of stone for the manufacture of the pyramids on round wooden logs. Through this principle they could reduce friction, increase the speed of movement of these blocks and importantly alleviate the arduous tasks that were theirs.  Then, during the fifteenth century, Leonardo da Vinci discovered the principle of rotation. He made the first sketches of a ball bearing and realized that the friction would be reduced if the rolling elements (balls) did not touch them. Thanks to Mr. Da Vinci, we discovered the principle of ball cages in ball bearings. This concept was reviewed in the eighteenth century in connection with the manufacture of a
carriage ride through the English who finally lodged a patent on this principle. Here are a few lines of the seductive story of the discovery of the concept of rotation, one more argument in favour of the ball bearing: The Great Leonardo da Vinci 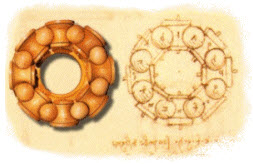